Cerebral Palsy is a broad term which encompasses many different disorders of movement and posture. To describe particular types of movement disorders covered by the term, pediatricians, neurologists, and therapists use several classification systems and many labels.

All people with Cerebral Palsy have damage to the area of the brain that controls muscle tone. As a result, they may have increased muscle tone, reduced muscle tone, or a combination of the two (fluctuating tone).

The parts of their bodies which are affected by the abnormal muscle tone depends upon where the brain damage occurs.

Spastic Cerebral Palsy is the most common type of Cerebral Palsy affecting about 70%-80% of the cases. It causes the muscles to be stiff and permanently contracted.

With spastic cerebral palsy, the area of the brain controlling movement is affected. Spasticity means stiffness or tightness of muscles. The muscles are stiff because the message to the muscles is relayed incorrectly through the damaged part of the brain. When people without Cerebral Palsy perform a movement, some group of muscles become tighter and some groups of muscles relax. In children with spastic cerebral palsy, both groups of muscles may become tighter; this makes the movement difficult.

Spastic Cerebral Palsy is often sub-classified as one of five types that describe the affected limbs:

A lack of control is often most noticeable when the child starts to make a movement. Children with Athetoid Cerebral Palsy often have very weak muscles or feel floppy when carried. People with this type of Cerebral Palsy may have problems co-ordinating muscle movements that are needed for speech – this is called dysarthria.

Ataxic Cerebral Palsy affects about 5%-10% of cases. This form of Cerebral Palsy is characterised by low muscle tone and poor coordination of movements.

Children with Ataxic Cerebral Palsy look very unsteady and shaky. This rare form of Cerebral Palsy affects the sense of balance and depth perception. Affected persons often have poor co-ordination and walk unsteadily with a wide based gait, placing their feet unusually far apart. They have a lot of shakiness, especially when they are trying to handle or hold a small object such as a pen.

This type is about 10% of all cases and has several areas of the brain involved, so the description of a particular individual’s condition may involve several of the above terms and symptoms.

Gross Motor Function Scales can be used to measure an individual’s ability in a specific area, such as walking/mobility. 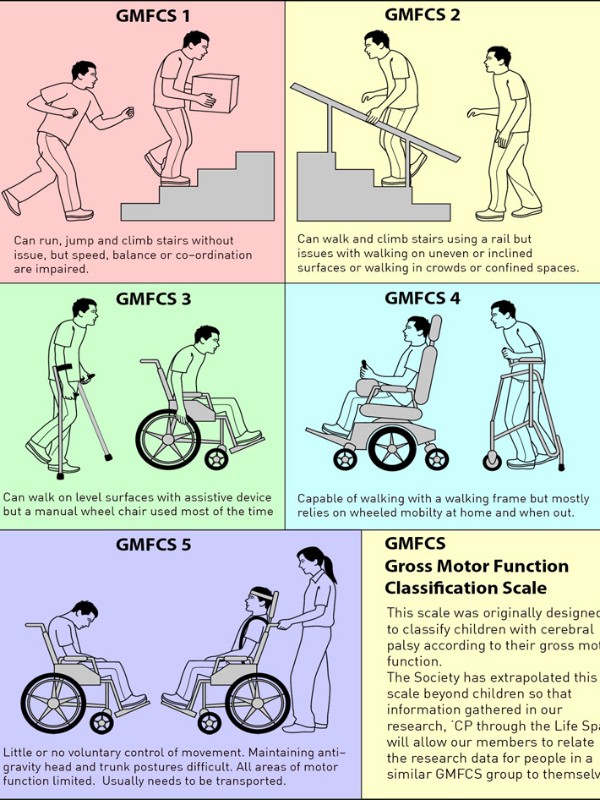 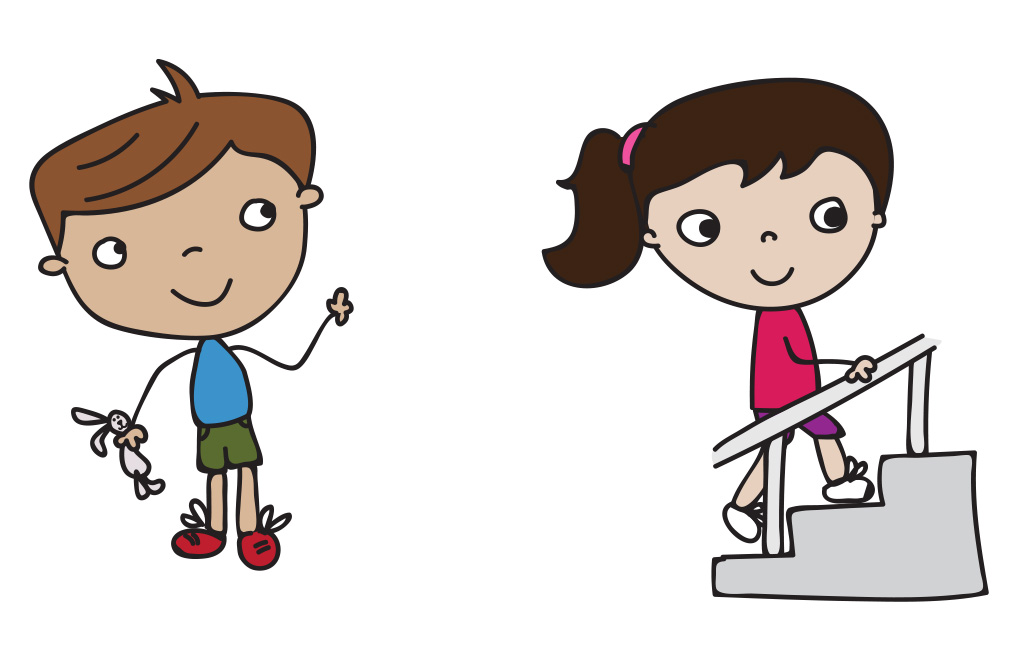 Children walk indoors and outdoors, and climb stairs holding onto a railing, but experience limitations walking on uneven surfaces and inclines, walking in crowds or confined spaces. 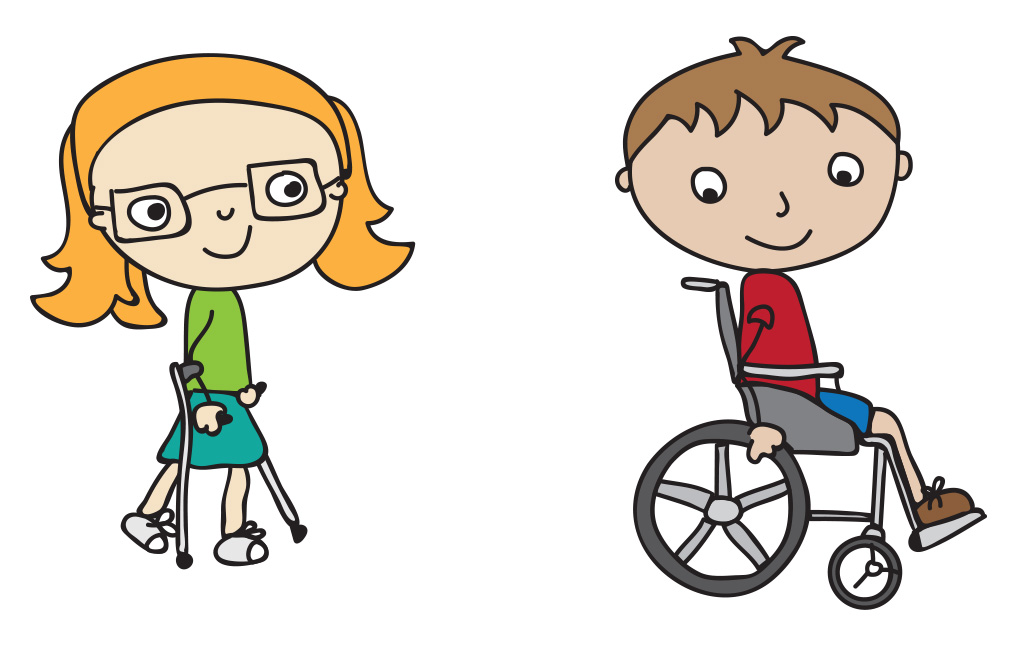 Children walk indoors and outdoors on a level surface with an assistive mobility device. Children may climb stairs holding onto a railing. Children may propel a wheelchair manually or are transported when travelling for long distances or outdoors on uneven terrain. 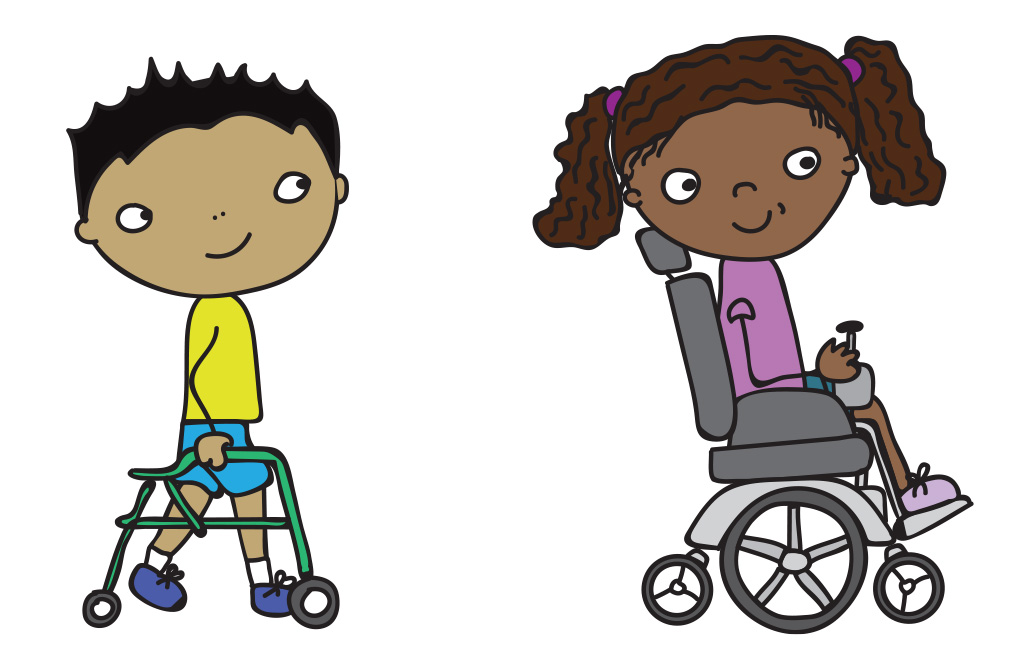 Children may continue to walk for short distances on a walker or rely more on wheeled mobility at home and school, and in the community.