In October 2021 we took the opportunity to acknowledge and celebrate the Cerebral Palsy Society’s 70th anniversary.
We ran a month’s worth of Flashback Fridays on our Facebook and Instagram pages looking back at some of the important milestones, and people in the Society’s past. 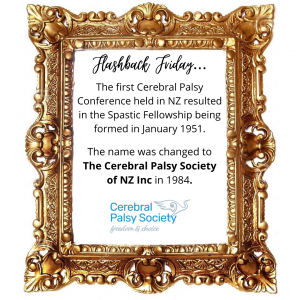 A look at how it all began……

The first Cerebral Palsy Conference held in NZ resulted in the Spastic Fellowship being formed in January 1951.
The name was changed to The Cerebral Palsy Society of NZ Inc in 1984. 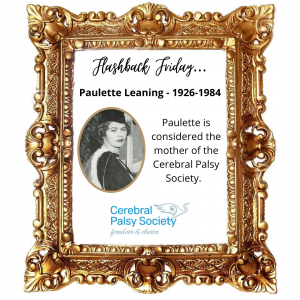 Paulette Leaning had athetoid CP and attended the Wilson Home school.
Spurred on by Dr Earl R Carlson, an American who had cerebral palsy, during his 1948 visit Paulette went on to receive a BA from Auckland University and her Teaching Certificate.
She was the initial Auckland representative of the Spastic Fellowship.
In 1956 she was sponsored on a world trip to study the education issues of children with CP. The book on her findings, The Challenge of Cerebral Palsy, was published in 1958.
Paulette had a long and distinguished teaching career. 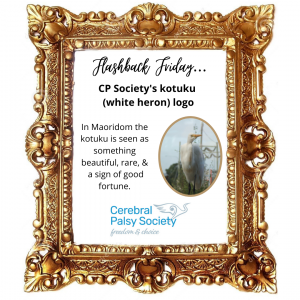 The launch of the current Cerebral Palsy Society logo featuring the kotuku (white heron) took place at the Mid-Winter Christmas lunch in June 2007.
In Maoridom the kotuku is seen as something beautiful, rare, and a sign of good fortune – an apt symbol to represent the Society.
At the launch, a real kotuku appeared outside the window (pictured) and showed a curious interest in what was happening inside.
It watched proceedings for more than an hour before flying off and those attending were left in awe at such an omen. 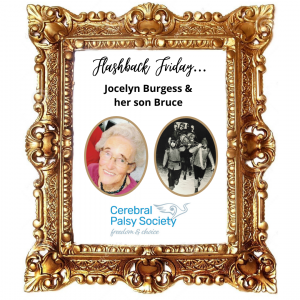 Jocelyn Burgess is recognised as being one of the most tireless workers for the Cerebral Palsy Society.
She was known for her determination and tenacity ensuring that her son Bruce, and others with Cerebral Palsy in NZ, received a fair go.
She served on the Society’s board for more than 20 years and was made a Life Member of the Society in 2008 and passed away in 2012.

In 1978, when he was 24 years old, Bruce, conquered Mount Ruapehu with the help of legendary mountain climber Graeme Dingle.
He’d trained at the Turangi Outdoor Pursuits Centre and a documentary about the climb, called All The Way Up There, was produced.
Bruce passed away in 2015. 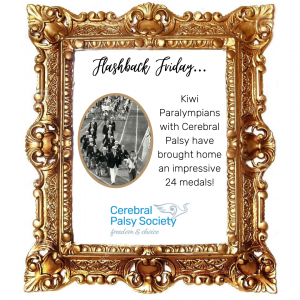 Thanks to our friends at Paralympics New Zealand for the stats and the photo.

It’s an important time to be connected. Connecting with your community is an incredibly powerful way to beat isolation at this time.

Join our online community today where you can speak with CPS staff, and other families around New Zealand who either have, or know someone living with Cerebral Palsy.

Request A Call From Our Team

We’re here to help. If you’re feeling isolated or need support, our team is available to talk. Sometimes, having someone to chat with can make a huge difference during this time of isolation.

Why not request a call or email from the team today?